You are here: Home / About us / Resurrection Catholic Parish Icons / The Annunciation Icon 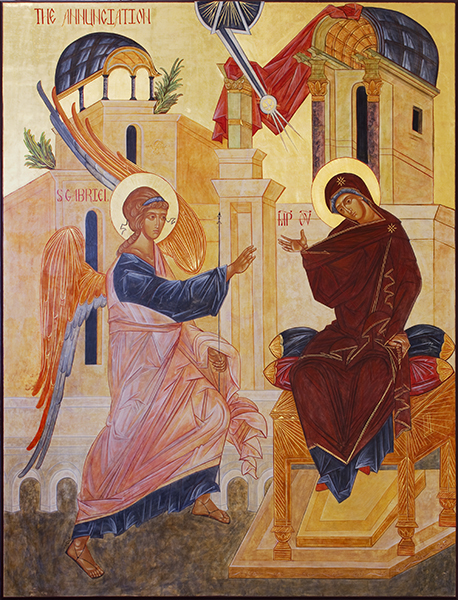 The Resurrection Catholic Parish icon “The Annunciation” commemorates the announcement by the Archangel Gabriel to the Virgin Mary that the Son of God would become incarnate and enter into this world through her womb. God in his infinite mercy submits himself to the free decision of a pure, immaculate young woman to realize his plan for saving the human race. With her affirmation, Mary makes all of that possible. The biblical story is found in the first chapter of the Gospel of Luke (1:26-39).

In this icon, God is represented by a circle; God has no beginning and no end and cannot be depicted in a form. Within the circle, a dove represents the Holy Spirit. The three rays upon Mary represent the Trinity. In the buildings, which signify the Arc of the Covenant, are bushes that are symbolic of new life. Mary sits on the viewer’s right on a throne indicating she is the theotokos – Mother or bearer of God. Mary is also elevated, indicating her place of honor. Her posture and slightly bowed head indicate her humility and obedience. Raising her right hand, she signifies her acceptance. In doing so, she is answering the sender, not the messenger.

Gabriel has his one wing lifted and knee bent, showing the action of landing from swift descent. His feet do not touch the ground, giving an air of urgency and indicating he is coming from another part of reality. The staff he holds in his left hand shows his authority. His hand is outstretched in greeting as an ambassador extraordinaire, sent to deliver this message from God!