You are here: Home / About us / Resurrection Catholic Parish Icons / Christ Enthroned Icon 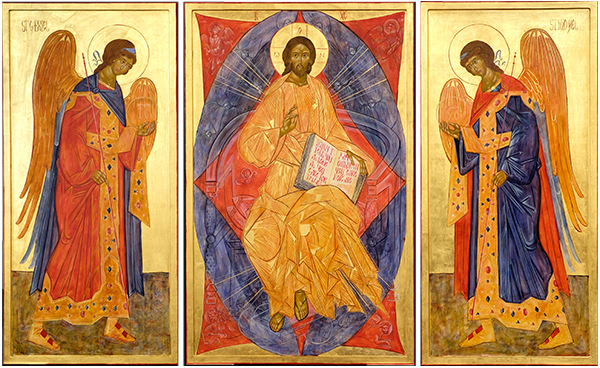 This icon possesses a vision of greatly concentrated power, in which many aspects of the mystery of the Incarnate Word converge.  Seated on a throne supported by the wheels of cherubim, surrounded by seraphim, Christ appears above all, as the Creator and Lord of the whole universe, which orders itself around him in accordance with the combined visions of Ezekiel and Isaiah:  see the square rhombus of the earth, in red and the oval-shaped heavens in dark blue.  The throne, carefully delineated in white, expresses a cosmic symbolism, with its cubed seat surrounded by a circular arch; the rectangular footrest on which the Lord paces his feet further emphasizes his Lordship: “with heaven my throne and earth my footstool” (Is 66:1).

The brilliant red of the two square rhombi, set off by the dark blue that separates them, evokes the mystery of the One who at the same time is both impenetrable Light and impenetrable Obscurity.  The figure, with a “Brilliance like amber” (Ezk 1:27) – of Christ the Word, which emerges so distinctly from the fiery red background and successfully tones down its brightness, announces by the silent evidence of the vision that the divine darkness, shining as the brightest of al lights, has manifested itself as Light for all humanity.

The “four living creatures” of Ezekiel’s vision – man, lion, ox and eagle long considered a symbol of the provident omnipresence of God; but in the new era of grace these four elements came to signify the Good News of salvation proclaimed by the evangelists to the four corners of the earth.

Christ the Lord holds the book of the Gospel, rendered in pure white, the most luminous spot in the whole icon.  Four bundles of golden rays issue from him,  the Center from which a new creation pours forth.

The various aspects of the mystery of Christ as depicted in this icon are fulfilled in the Clothed figure of Christ who appears like a flash of lightning  in a golden-threaded robe.  He is the Judge of the Eighth Day.  He is the Lord of History.  He is the One of whom Scripture says:  “For he is to rein until he has put all his enemies under his feet. ” (1Co 15:25).

In the  serious, searching expression of his face we discover that he is also the Merciful One, the Friend of humankind, he who hands down a law of liberty and encounters us in His gaze.