You are here: Home / About us / Resurrection Catholic Parish Icons / Christ the Healer Icon 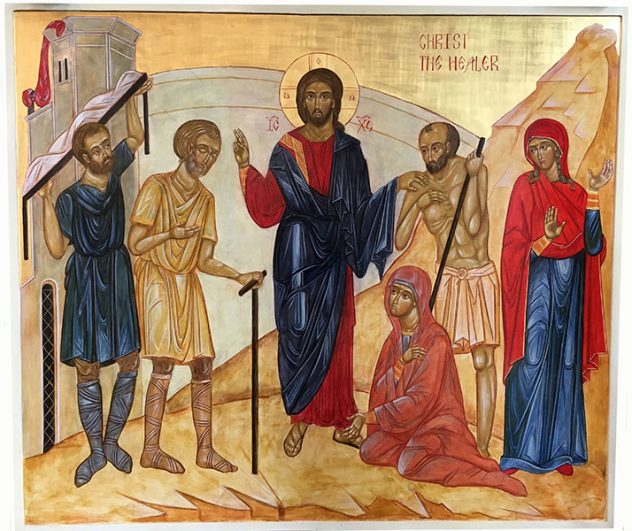 Icon is the Greek word for “image.”   It is important to understand that the icon is based on the Incarnation, that the Word became flesh and dwelt among us.  In this regard, it is equal to the written word found in Scripture.  It is a Sacramental equal to the Word of God in line, color, and form just as scripture is the Word of God in print, on paper, and bound in book form.

The Christ the Healer icon, blessed here at Resurrection Catholic Parish, exhibits both the scriptural basis of the icon and the symbolic language of Byzantine aesthetics that speak to the heart.  In this symbolic language of iconography everything is happening all at once and time is experienced as a still point of contemplation.

The central figure of Jesus the Christ is always represented, in pre-resurrection images, clothed in an outer garment of blue and an under garment of red.  Blue is called the color of “the mystery of beings” and is the color of transcendence and divinity.  Red signifies the life that the Savior brings to the children of God by the shedding of His blood.  Over His shoulder is the gold band of His authority as Son of God.  Inscribed in the gold halo that surrounds His head is the cross, and within the cross we find the Greek letters Omega, Omicron, Ni, abbreviations for “Before Abraham was, I AM.”  This cruciform halo is only depicted on the icons of Jesus.  To the side of the halo is the Greek abbreviation for Jesus Christ.  Icons are considered to be true icons when their names are written on them – just as all icons are considered to be worthy of veneration after they are blessed and received into the community for which they were written.

The five other figures depicted in this icon all find their basis in the healing miracles recounted for us in the Gospels.  From left to right are the Paralytic who was instructed to pick up his mat and walk; the Blind Beggar whose sight was restored; the Woman with the Hemorrhage; the Leper, and the Woman Possessed by Seven Demons.

The Paralytic is clothed in green, a color that expresses the new life found in the forgiveness of  sins.  The mat he carries and the gesture of the figure speak to the challenges of carrying the new life to which we are all called to in Christ Jesus.

The Blind Beggar, restored to sight by his faith and the touch of Jesus, is wrapped in gold, the symbolic color of the Light and Glory of God.  Gold reflects the light that he asked for in response to the question of Our Lord, “What do you want me to do for you?”  It also represents the praise to the Glory of God that he gave when his sight was restored.

The Woman with a Hemorrhage, healed by touching just the hem of the garment of Jesus, is dressed in the color of pink.  Pink is symbolic of her joy, the joy that  “ she felt in her body as she was healed of her affliction,” and the peace of her saving faith.

The Leper is clothed in cleansing white.  He said to Jesus, “Lord, if you wish, you can make me clean.”  Jesus then stretched out his hand, touched him, and said, “…Be made clean.”

The Woman possessed by seven demons is in tradition thought to be Mary Magdalene. She is clothed in the red mantel and green undergarment associated with her.  Her stance is that of one who is reluctantly brought to Jesus for healing and then stopped in her tracks, arrested by the power of mental and emotional cure.

Also, in the very shallow background of the icon, there are four elements each of which possess a spiritual significance.   The background is intentionally two-dimensional as it brings us to encounter the boundless love of God pouring out toward the viewer who is the true point of perspective of the icon.

Behind the figures on the right are the mountains and emptiness of the desert that invite us to know that God heals us even in the wilderness of desolation.  To the left are the buildings of the city and church where we encounter healing in the active contemplation of daily life and community.  The red cloth atop the buildings reminds us of the interiority of spirit that we are called to in, what may be at times, the frenetic activity of our lives.  Joining mountain and city is the wall of Jerusalem.  Jerusalem – the city of destiny to which Jesus was called – the destiny to which we all journey.