You are here: Home / About us / Resurrection Catholic Parish Icons / Protecting the Veil of the Mother of God Icon 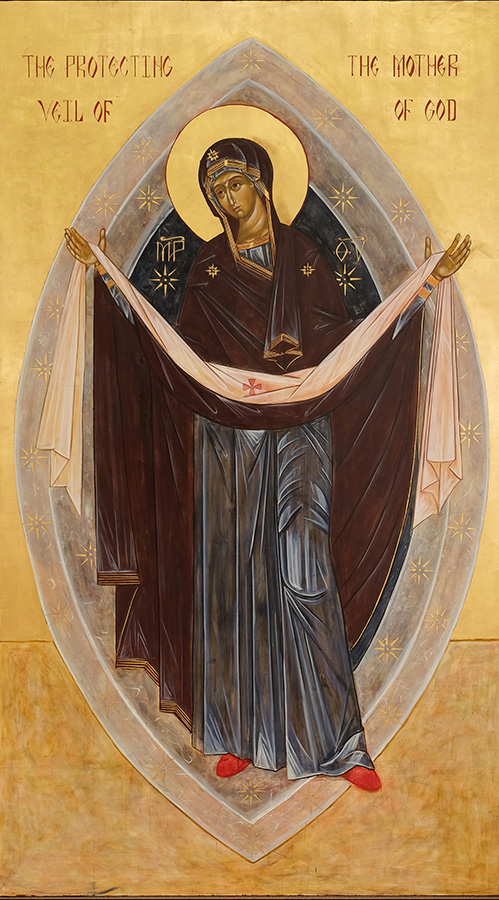 In the Icon of the Protecting Veil of the Mother of God, written for the people of God and residing in Resurrection Catholic Parish, we see a new translation of an ancient and deeply venerated image dating to an extraordinary event in the 10th century.  That event, the miraculous appearance of the Mother of God in Constantinople, occurred in the Blachernae church where her robe, veil, and part of her belt were preserved after being transferred from Palestine in the fifth century.

On Sunday, October 1, 911 AD, during the All-Night Vigil, when the church was overflowing with those at prayer, the Fool-for-Christ Saint Andrew, at the fourth hour, lifted up his eyes towards the heavens and beheld our most Holy Lady Theotokos (“God Bearer”) coming through the air, resplendent with heavenly light and surrounded by an assembly of the Saints: Saint John the Baptist and the holy Apostle John the Theologian accompanied the Queen of Heaven. On bended knees the Most Holy Virgin tearfully prayed for Christians for a long time.  Then, coming near the Bishop’s Throne, she continued her prayer.

The Theotokos approached the center of the church, knelt down and remained in prayer for a long time. Her face was drowned in tears. Then she took her veil (cerement) off and spread it over the people as a sign of protection. After completing her prayer, she took her veil and spread it over the people praying in church, protecting them from enemies both visible and invisible. The Most Holy Lady Theotokos was resplendent with heavenly glory, and the protecting veil in her hands gleamed “more than the rays of the sun.” Saint Andrew gazed trembling at the miraculous vision and he asked his disciple, the blessed Epiphanius standing beside him, “Do you see, brother, the Holy Theotokos, praying for all the world?” Epiphanius answered, “I do see, holy Father, and I am in awe.”

The Ever-Blessed Mother of God implored the Lord Jesus Christ to accept the prayers of all the people calling on His Most Holy Name, and to respond speedily to her intercession, “O Heavenly King, accept all those who pray to You and call on my name for help. Do not let them go away from my icon unheard.” During that time, the people in the city were threatened by a barbarian invasion. After the appearance of the Mother of God, the danger was averted and the city was spared from bloodshed and suffering.

In this translation of the ancient icon, the Theotokos stands within the mandorla, representing the intersection of the visible and invisible Universe of God’s creation; she holds in her hands the precious veil of protection which she spreads over all of her children in the anticipation of its infinite value.  In the Orthodox tradition, numerous churches and basilicas are named in honor of this miraculous event, including the great basilica of St. Basil in Moscow.

In the tradition of the Western Church, our Lady is venerated as the Virgin of Mercy, and her icon, dated to the 13th century, shows her with her children gathered together under her spacious, outstretched cloak.  Through the centuries, these icons have included a variety of individuals gathered for protection, individuals ranging from clerical members to monastic communities to families who may have commissioned such an icon.  In some images, angels hold up her cloak as the Theotokos holds her child in her arms.

On October 1, the Feast of the Protection of the Most Holy Theotokos, we implore the defense and assistance of the Queen of Heaven: “Remember us in your prayers, O Lady Virgin Mother of God, that we not perish by the increase of our sins. Protect us from every evil and from grievous woes, for in you do we hope, and venerating the Feast of your Protection, we magnify you.”