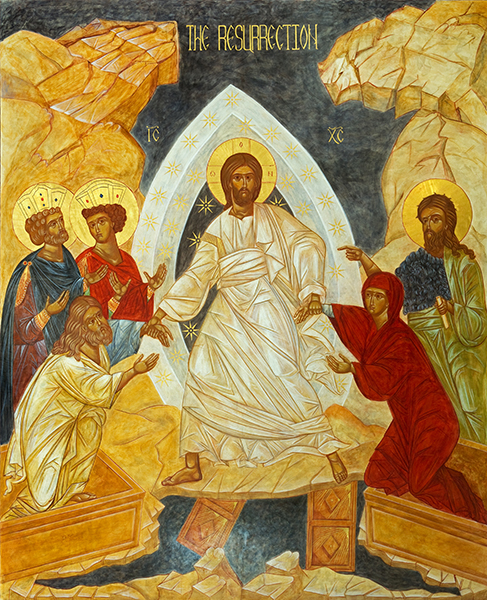 Based on ancient prototypes, the Resurrection Catholic Parish icon of “The Resurrection” shows Christ’s triumphant descent into hell after his death on the cross on Good Friday. Christ stands on the fallen gates or doors of hell, symbolizing the victory of the divine over evil.

The two tombs in front are those of Adam on the viewer’s left and Eve on the viewer’s right. These signify that Christ’s arrival is for all time starting at the beginning, and that he is for all people. It is he who raises Adam and Eve by their wrists from their tombs.

The rocks in this icon relate to those in the “Holy Crucifixion” icon – the rocks at Golgotha – and the breaking open of the gates of hell. The gates are also gilded in gold to also signify the touch of Christ.

Christ at the center is dressed in white, the color of divinity. In instances of Jesus’ earthly life in other icons, He is dressed in blue in His divine form, in red in his human form. The almond shape, a mandorla, surrounding Christ is the geometric intersection of two circles, the tips of which touch heaven and earth, with Christ in the middle. The three rings in the mandorla represent the Trinity, and the stars are the light of God. As in the “Holy Crucifix” icon, Greek letterings above His shoulders are the abbreviations for “Jesus” and “Christ” – human and divine.

The holy ones standing on either side of Christ look on in worshipful joy: on Christ’s right is King Solomon in royal purple and blue, whose hands gesture worship, and King David closest to Christ, in red, who is gesturing awe. To Christ’s left is John the Baptist, garbed in camel hair and a green robe, traditionally signifying prophets in icons. The scroll that he holds in his hand refers to John’s words as the prophet, “Behold the Lamb of God, who takes away the sin of the world” (John 1:29).

Watch a video about the creation of this icon:
https://youtu.be/svqyB4EWDuk