You are here: Home / About us / Resurrection Catholic Parish Icons / The Holy Crucifixion Icon 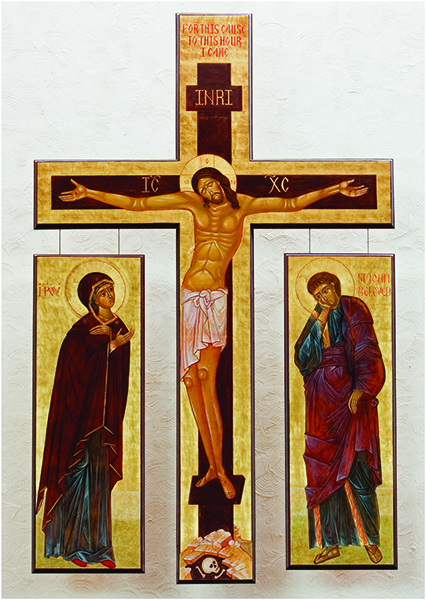 The Resurrection Parish icon “The Holy Crucifixion” follows an ancient Byzantine model from the fourth century. Christ was crucified on Golgotha (meaning place of the skull), which is traditionally considered to be the burial site of Adam. The skull at the base of the cross is that of ancient Adam. In this icon, Christ, the new Adam, triumphs over death through death. The body of Christ on the cross is the Incarnate God fully dead, fully alive!

At the top is written, “For this cause, to this hour, I came” from the Gospel of John. Above the arms are the Greek abbreviations for “Jesus” and “Christ” – human and divine. “INRI” is the Latin title that Pontius Pilate had placed over the head of Jesus on the cross; it means “Iesvs Nazarenvs Rex Ivdaeorvm,” that is “Jesus of Nazareth, the King of the Jews.” The halo around Jesus is cruciform – perfectly circular –relates geometrically to the circle of God: never beginning, never ending. In the cross of the halo are three Greek letters, abbreviations for “I am Who I am”, the name used for God in Exodus 3:14.

To Christ’s right stands Holy Mother Mary, theotokos, meaning Mother of God or “God-bearer.” Mary’s hand on her breast is a gesture of mourning, while the other hand points us to the way, to Christ. Around Mary are three stars representing her virginity before, during and after the birth of Jesus. Her red shoes signify both her lineage from the house of David and her royalty.

To Jesus’ left is John the beloved disciple, dressed in a mantel and a tunic. The gold stripes on John’s tunic are called clavi, traditional symbols showing authority. His face shows bewilderment at this most remarkable series of events. His hand by his side signifies a passive surrender. John is shown here without a beard, brown hair, and as a young man.

View a film about the creation of this first icon at Resurrection: