You are here: Home / About us / Resurrection Catholic Parish Icons / The Holy Family Icon 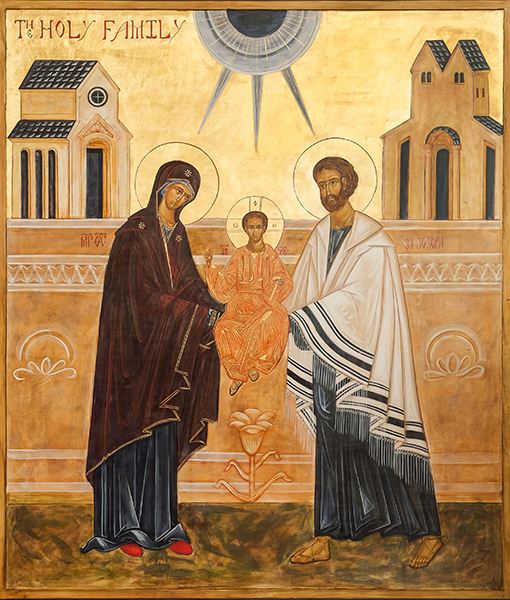 In the icon of the Holy Family, written for the people of God, and residing in Resurrection Catholic Parish, we see the “ideal” of Christian marriage as the “true and living icon” of the life and love of the divine Trinity.   The elements that speak to this theology of the family, and to the Holy Trinity are succinctly summarized in the word “relationship.”  One important fact that needs emphasis is that Father, Son, and Holy Spirit, operate similarly to husband, wife, and child in divine relationship.  This relationship, either human or Divine, is understood as making room for the other persons in all-embracing mutuality in relationship.  In marriage, there are differences between the individuals, but no inequality.  Each person makes room for the other in a communion of thoroughly equal persons who are fully distinct and in full communion.

In the center is Christ Emmanuel, born a child and yet a king, clothed in the Garment of Light.  He is Wisdom from on high, Lord of Might, Key of David, Dayspring from on high, Emmanuel “God with us.” With his right hand, he both blesses the world and signifies that he is fully human, and fully divine.  In His left hand, he holds a scroll referring to himself as the “Word made Flesh.”  In His halo is a cross with the Greek letters for I AM, and on either side of his shoulders are the Greek letters for JESUS and CHRIST.  As Holy Wisdom, his face is not that of a child, but of a young man full of wisdom.  His figure is presented, not embraced, as our link between heaven and earth – as our Salvation.  Distinctly Christ Emmanuel and fully in union with his parents, as He is in union with The Father and The Spirit.

His Mother, The Most Holy Theotokos,”God Bearer,” along with His step-father, St. Joseph, present the Christ Child to the world.  Mary is dressed in a veil of red purple, as this color is synonymous with royalty, and paradoxically, of her humanity.  She bears the stars that refer to her virginity.  Her undergarment is blue, which is the color of divinity, and her vermillion shoes refer to her linage from the House of David.  Next to her are the Greek letter that abbreviate the title, expressing her singular identity, as Theotokos, that was given to her at the Ecumenical Council held at Ephesus in 431 AD.

St. Joseph, along with Mary, presents to the people of God, the child whom he has loved and raised as his own son.   As he, along with his family, was an observant and devout Jew, he is here clothed in a traditional Jewish fringed prayer shawl called a tallit.   The shawl represents the covenant that YAHWE established with his chosen people.  The fringe on the shawl represent the laws of the covenant, and on each of the four corners of the garment is a longer fringe with a blue thread woven into it to represent God.  Both parents lean in toward their son, and they invite us to enter into this mutuality that makes room for the distinct identity of the other.

The half circle with three rings and three rays in the center top of the icon is a symbol of the Holy Trinity.  God the Father is never depicted in iconographic imagery; only His Incarnate Son, the second person of the Holy Trinity is depicted in human form.  The rays emanating from the circle depict the Holy Spirit descending upon the Holy Family.  This is the same imagery found in the icon of The Annunciation.

The two buildings in the icon represent the church and the home, which are the pillars that strengthen, nurture, and sustain all families.  The wall in the icon refers us to the wall of Jerusalem where Jesus went many times with his family; finally, He would go there on his own to fulfill His purpose to suffer, die, and be raised again. The wall also reminds us that we journey on our pilgrim ways, as families, to become holy in mutual respect and loving relationship.

The Holy family offers the most intense experience of human kind, absent racism, sexism, hierarchy, only one undivided human communion, imaging the divine communion of Father, Son, and Holy Spirit – Three in One.